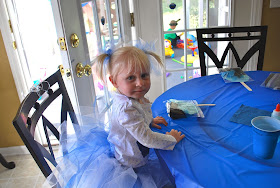 Hi again, thanks for coming back! This post is prompted by an e-mail I received from a birthday blogger at www.thebirthdayblog.net who is featuring my post about Kerrick's Cars party on her site on March 12th. Wow, that is exciting for me! It's cool to have someone appreciate your ideas enough to want to share them with others. I had told her about the Cookie Monster and ladybug parties I have also had and said I would work on new posts for those to send to her. So here is the Cookie Monster Party I threw for Krisalyn's 2nd Birthday.


I made the invitations, I folded blue card stock in half and then cut out a circle but didn't cut all the way so the fold was still on the top. This made a circle that opened on the fold.  I typed the inside of the invitation onto brown card stock and cut out a circle the same way around the words. I glued the brown circle inside the blue one. I glued large googly eyes on the outside top of the circle, and cut out a black mouth from card stock and glued that on. And thus you have Cookie Monster with a cookie in his mouth! 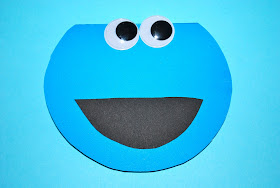 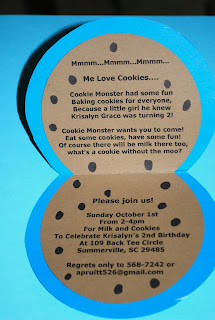 I decided to make a Tutu for Krisalyn to wear.  From the tutu stemmed a shirt, and pigtail holders to match. For the shirt I cut out a Cookie Monster shaped head from blue fabric, and painted with fabric paint a black mouth, and glued on with fabric glue 2 large googly eyes. My great neighbor did the actual sewing, I haven't gotten into my sewing machine yet, but plan too in the near future when time allows! Here is the complete outfit. 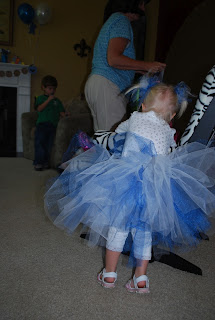 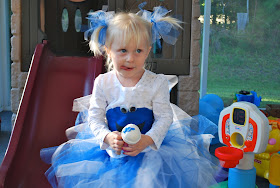 When I decided on the Cookie Monster theme I wasn't aware that finding just C. Monster decorations was going to be so hard. I found lots of decor out there with other characters on it, but I wanted just Cookie.  I started with blue and white for the table coverings, cups and napkins. Then I searched Etsy, and found a few die cut decorations. However, they are expensive when you buy them there, how I wished at that point that I had a machine to cut out my own.  I found the cheapest ones I could and purchased those. For other decorations I bought a package of blue paper in different hues. I then looked for coloring pages online and printed out the coloring pages with C. Monster onto the blue paper.  I cut out the C. Monsters and glued googly eyes onto them.  They came out super cute and were inexpensive, and easy to make.  I made a Happy 2nd Birthday Krisalyn Banner, and a chocolate chip cookie banner. I hung the cookie banner across the mantle, and put wooden alphabet blocks we had on the mantle with Krisalyn spelled out with the blocks, then placed piles of the blocks around for extra decor.  On the front door as guests were coming in I had a 123 Sesame Street sign that I got on Etsy. As you know every episode of Sesame Street is brought to you by a letter and a number.  On the inside of the door I had 2 signs for when people were leaving that said Today's party was brought to you by the Letter K (for Krisalyn) and the number 2 since she was turning 2. Again just coloring pages printed onto colored paper. I splurged and bought one big C Monster balloon a few latex blue and white ones, and then the dollar store had white and blue mylar star balloons. Here are the decorations! 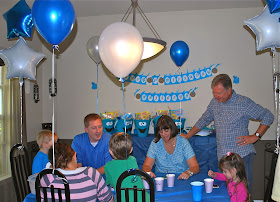 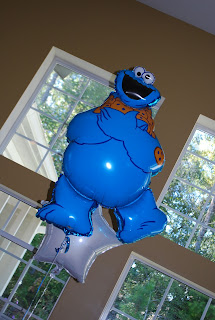 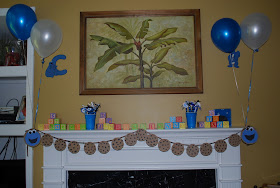 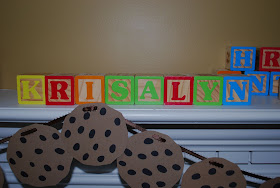 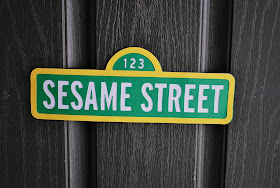 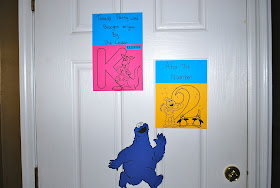 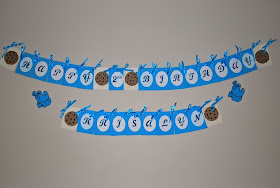 The activities for the kids I came up with were to paint cookies, and make C. Monster puppets on popsicle sticks. I had come across the painting idea in one of my cookie cookbooks and had thought what a cool birthday party activity. Each kid got one C Monster shaped cookie and another shape to paint. The kids had fun doing them.  I had the cookies frosted with a  white glaze that is great for painting on, and used food coloring for the paint. I think next time I would water it down though as when the kids ate the cookies their mouths turned all sorts of weird colors! The C Monster puppets were just a C Monster head shape cut out of blue card stock that I drew the black mouth shape onto, and blue and black tissue paper strips that the kids crumpled up and glued onto the appropriate area of the blue head. I had the heads glued onto the sticks already with each kids name written on the backs of the sticks. I had the tissue paper strips and 2 googly eyes along with the popsicle stick in ziploc bags for each child ready to go.  We also played pin the chocolate chip on the cookie game. I got a brown round tablecloth and taped it to the wall, we drew a circle into the middle of it and whoever got it closest to the circle won. By the end it looked like a huge chocolate chip cookie! Here is that fun! 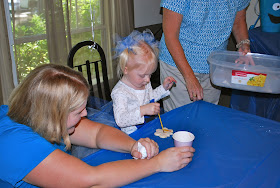 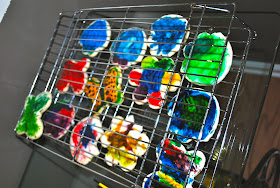 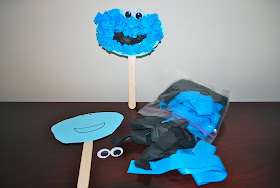 My husband would say you can never have too many cookies, and since the party was from 2-4 I knew  I didn't have to serve a meal. So we went with just cookies, and cake pops! I wanted cookies for the different characters on the show. I found a C. Monster cookbook that had a couple of good options, but I added more.  Here are the different kinds of cookies I came up with. My Mother-in-law made the signs for each type of cookie using stickers and markers! We also had blue punch, and blue popcorn too! Instead of a cake, you guessed it, we had a giant cookie cake. I freehanded a C. Monster onto the cake and used the Wilton tip #233 to make him look furry, gave him big globs of white frosting eyes, and black goggly spots!


I happened to be walking into Michael's one day and noticed some blue plastic sand buckets and sand toys that were on clearance! I snagged all I could find! I knew I would use these for the favors. I painted acrylic paint C. Monster faces onto them. Each kid's name was painted on the back of the sand bucket.  I filled them with mostly things from the dollar store, and anything blue I could find, Sesame Street coloring books, great pinwheels that were 3 for a dollar, a blue airhead, a blue old fashioned candy stick, a blue pixie stick, Rice Krispy Treats, blue glow bracelets, and Welch's fruit snacks (cause they are in blue packaging.) Each kid also got a sand toy (.60 each) It was a really fun favor for me to make and I think the kids liked them a lot! 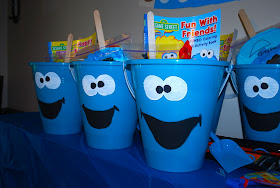 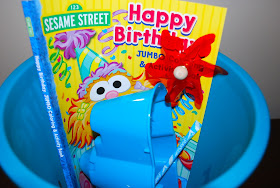 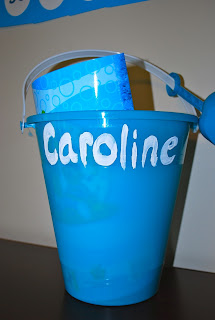 I have been to parties before where kids didn't really want to wear party hats, but I think a bunch of munchkins sitting around a table with corny hats on is adorable! I took a package from Party City of different colored hats, and realized that they all corresponded to a character on Sesame Street.  If I could have found all blue I would have gotten them. Realizing the correspondence got me painting them to look like those characters. I used left over googly eyes for them.  Can I just say the kids wore these for most of the party and some kids even left with them still on.  They LOVED them! 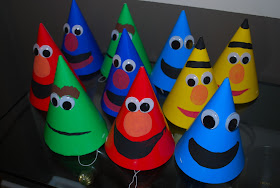 I knew this post would be a long one, I just had so many fun ideas for this party! Thanks for sticking with me through it! A SUPER BIG thanks to my Mother-in-law who helped me with the last minute details the night before and helped decorate the house. I hope if you were thinking about a Cookie Monster party, that this inspired you! If you want any of the recipes for any of the cookies leave a comment and I will get it to you! Have a fun filled day!